Nearly five months later I finally received a reply from my congressman about his stance on climate change policy. Today I sent back another reply and when he finally gets back to me, I will reply again. 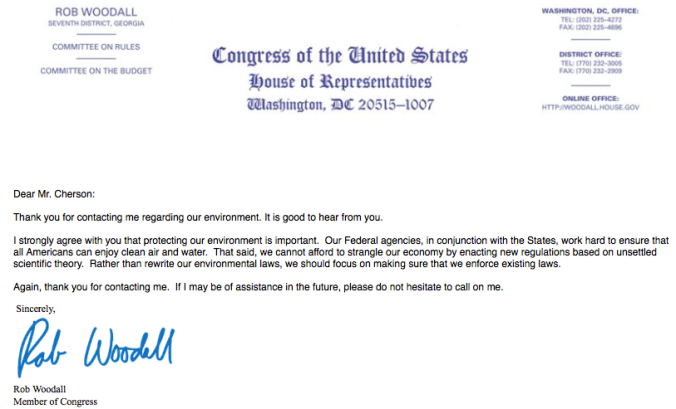 I am deeply grateful for your reply to my concern about your position on the President’s Clean Power Plan, Clean Air Act section 111d.

Please do not take my word on climate change for I am not a climatologist. However, I have received an education that taught me how to balance the weight of evidence, credible vs. non-credible sources. The overwhelming majority of scientific institutions around the world, representing the vast majority of scientific experts in this topic agree that both climate change is real and human activities are the primary driver.

Is using executive authority to reduce greenhouse gas emissions the most efficient and cost effective way the United States can deal with unfettered emissions? No, not by a long shot. Nearly every reputable economist agrees that a tax on greenhouse gasses would be the fairest way to rein in the negative externalities caused through our burning of fossil fuels. Taxes in other areas such as income or food could be drastically reduced to offset the new cost, the true cost of burning fossil fuels.

There are certainly plenty of policies that we can disagree on based upon the merits of policy design. However, to simply dismiss the necessity of dealing with climate change at any level is both offensive to me as a constituent and to the people you swore to protect and defend.

We have met several times and spoken in person about this issue and I sincerely look forward to the day when we can discuss policy differences— instead of this unfortunate denial of settled science.

Sincerely your constituent and friend,

2 thoughts on “Re: Dear Representative Woodall”